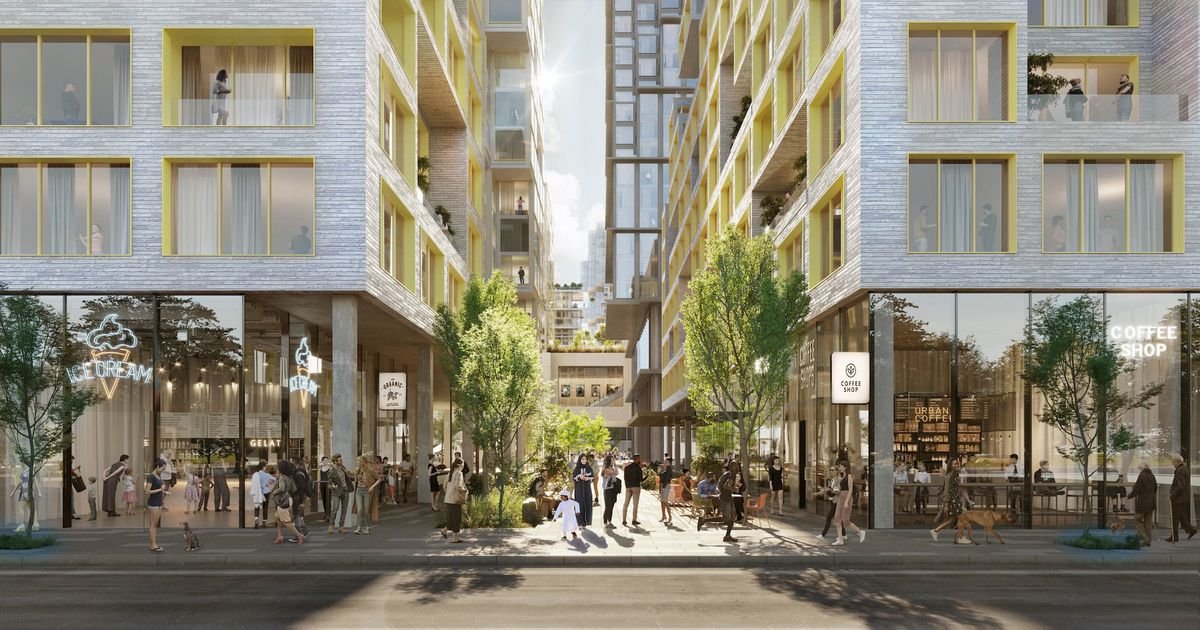 Innovation QNS, a $2 billion mega-development in Astoria, received its final approval Tuesday with a 46-1 city council vote on the rubber stamp project’s redevelopment application. The site will now contain more than 3,000 units, nearly half – 1,436 to be exact – marked as affordable, making the innovation the largest privately owned affordable housing project in the history of the borough.

But getting here from what was initially envisioned as a market-price luxury project, with designer-shop views and only 25 percent affordability, wasn’t easy. Innovation became a lightning rod during a two-year battle as the dueling sides settled on the best way out of the housing crisis: Is market-based luxury development taking the pressure off too much? Or should communities use the crisis to keep the line at true affordability and drive developers to drop some of their multibillion-dollar profits?

Councilwoman Julie Vaughn, representing the district in which the innovation would be located, became the face of the latter group and quickly and publicly promised a 50 percent capacity cap. But the term can be a clumsy way of describing housing that’s still out of reach for low-income New Yorkers, and Won knows it better than most. Astoria has been among the top ten New York subregions for new development for the past decade, according to an analysis by NYU’s Furman Center, but that hasn’t translated into affordability. As many as 92 percent of the new units in the neighborhood were market-compliant. As approved, the innovation would add about 1,500 additional units, nearly half of which will go to those on the lowest incomes — up to $36,000 for a family of three. Won claims the project’s unprecedented affordability as a win, but a “bitter one”. “The only way we could get more affordable housing was to fight and say ‘no’ because we are in a binary system,” Won told me on the eve of the final vote. We talked about being called a NIMBY, taking an unpopular stance, and how the negotiations really failed.

Our conversation has been condensed and edited for clarity.

How do you feel after the vote?

Also read  Tech executives: Here's a glimpse of what's to come in 2023 in terms of data and analytics

I must say it is bitter. In the circumstances I operate in – under this leadership, with this affordable housing crisis we are currently living in, a recession, high inflation rates – this was the best deal I could fight for my community. used to be. Yet it’s unprecedented for private land, for private development, where we have almost 50 percent of affordable housing, very affordable.

You could not exceed that limit of 50 percent.

Right now, census data shows us that in Community Board One, only 10 percent of my current residents could live in Innovation Queens if it were developed today. Ninety percent of my people can’t afford to live there because the median rent is $1,600 and the median income is $68,000. The developers said, “Look, if you do this program and this program, we can get you more affordable units.” I wasn’t ready to go [Mandatory Inclusive Housing] Option two, which would raise rents to AMI levels of up to 80 percent AMI, so you’d need to earn more than $86,000 to live there. I said no, I want very little income. I could make that deal if I just wanted to save face and say, “Look, I have 55 percent potential,” but I’m not willing to do that. All I care about is getting the best possible deal from the members of my community, the highest level of affordability in the greatest number of family units.

You have enough pushback to get that “no”.

You hear very openly from elected officials like the city president, who have been very critical of me for staying on the line. He was on TV saying “no” was never an option. And the municipal council chairman and mayor also say: “We are a yes city.” From their point of view, they are focused on getting out of this housing crisis. Whereas I have been very open and vocal that we cannot get out of the housing crisis by building luxury developments. We have enabled the development of luxury units and market-compliant units to promote the development of affordable housing.

What about those who say we can’t build enough without market rates?

for someone who says building is the only way out of this crisis Something, This is absolutely not true. You can’t oversimplify supply and demand and say there will be a filtering effect of building luxury market units or trickling down to value units or low income affordable market units, especially in the heart of working class Astoria. In markets like Khan’s, or in Sunnyside and Woodside. If you look in my district in Long Island City, Hunters Point, Court Square, we’ve built over 28,000 units in the last 12 years. What we didn’t see was a rent reduction in the surrounding areas or in my district. We’ve only seen an increase in rates. We can agree to disagree, but for me, as long as I’m in office, my priority will be to build affordable housing in deeper affordability levels and focus on family homes, not one-bedroom and studio.

A dynamic is beginning to form in which community opposition is associated with ‘anti-housing’. Did this happen during the Innovation QNS debate?

We were called gentlemen and we were called NIMBYs. The first thing you saw at my hearing when everyone came out was people of color. It was mostly Latino and Bangladeshi and Chinese immigrants who came out, children of immigrants who came out and said, “This is my neighborhood and I can’t afford to live in these expensive buildings that you’re proposing.” We didn’t have nonprofit executives speaking on behalf of community members. We literally had Bengali grandmothers speaking for themselves with a translator. Nydia Velázquez, my congressman, was so angry that people kept calling us gentrifiers. When speaking to the press and developers, she turned around and said, “Do we look like gentrifiers?” It’s really offensive.

During the conversation, did you feel pressured to be more responsive?

When this project came to my desk, someone of any leadership or stature said to me, this is the best you can get in terms of personal development. Sit down, follow the program, accept the offer and sell it and celebrate. And I said, “No.” That pressure comes in many different forms. All those anonymous quotes from anonymous sources of the congregation in the articles, they say things that are not true about the members. They will say that the member is dishonest. The member is part of the problem, does not propose a solution to the housing crisis, struggles not to have housing. I knew that if I wanted more affordable housing, I had to come up with a solution. And I did; I gave them creative ways to make housing more affordable within the frameworks we find ourselves in. And I was able to achieve that. And he met my requirements. But a few weeks ago I also received a call from other members of SOMOS [the gathering of influential New York politicians in Puerto Rico dedicated to raising awareness for Latino communities] And say, “Hey, I hear this guy walking into you with blah, blah, blah.”

What can be done outside of this binary system and these battles for individual projects to tackle the housing crisis?

In the long run, we need investment from the federal government, particularly reinvestment in NYCHA. When we talk about affordable housing, we have to talk about public housing. We need the state to reinvest in affordable homeownership, like Mitchell Lamas’ co-ops, and invest in existing developments like Woodside, because these co-ops are a path to homeownership for working-class New Yorkers. We need to pass an opportunity to buy (TOPA) bill at the state and city levels. We need to set up community land trusts and invest in them. We need to approve well-reasoned evictions at the state level so that we actually have decent tenant protection. We need to create a city-owned land bank to replace our ineffective sale of tax rights. We must ensure that city-owned land is always sustainable, affordable social housing. We can do a lot if we want to do it.