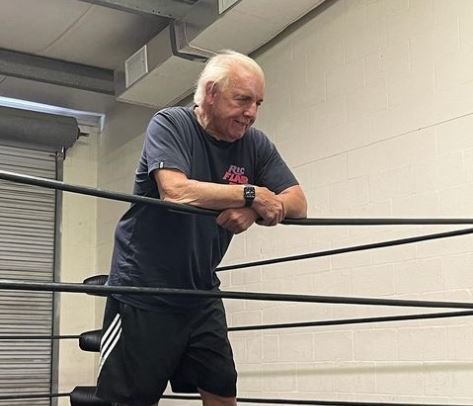 Ric Flair is one of the hardest working wrestlers of all time. ‘The Nature Boy’ has proven that age doesn’t matter to him, and at 73, he will be wrestling his last professional wrestling match. During his tenure, he was the greatest wrestler, and he had trained hard and accumulated invaluable knowledge.

Additionally, on Twitter, Flair recently shared a training video of his ex-wife Wendy Barlow. Barlow, 63, can be seen in the video performing rigorous wrestling training.

In case you didn’t know, Barlow was his fifth wife, whom he married in 2018. However, the couple decided to go their separate ways in 2021. They still get along and spend time together. The WWE legend has frequently shared updates on his preparations for his pro wrestling farewell match.

However, this time he shared a video of his ex-wife and called her Wonderful Wendy. He captioned it, ”Team Flair Mandatory Training! The wonderful Wendy takes the ring! WOOOOOO!”

In the video, with coaching and motivation from the Nature Boy, Wendy performed 20 push-ups before performing the rope and mat exercises. Flair is a highly skilled wrestler with a lot of experience. He won several championships in many wrestling companies including WWE, WCW, NJPW and others before leaving the game in 2012. He will, however, make his final appearance.

Ric Flair will make his final appearance next month

“The Nature Boy” Ric Flair will enter the squared circle for the last time on July 31. WWE Hall of Famer Ric Flair has announced to fans that his final match will be in July. Flair’s final match in Starrcast V will take place at the Nashville Fairgrounds.

Excitement among Flair’s fans is high for his upcoming in-ring return. Tickets for his last match immediately sold out once he revealed it, proving that he is still highly regarded in the wrestling world.

WrestleMania 24, was his last match in WWE where Shawn Michaels triumphed over him. However, he competed in TNA’s Impact Wrestling for approximately four more years before announcing his retirement in 2012.

Are you looking forward to Ric Flair’s final pro wrestling match? Let us know in the “Comments” section.