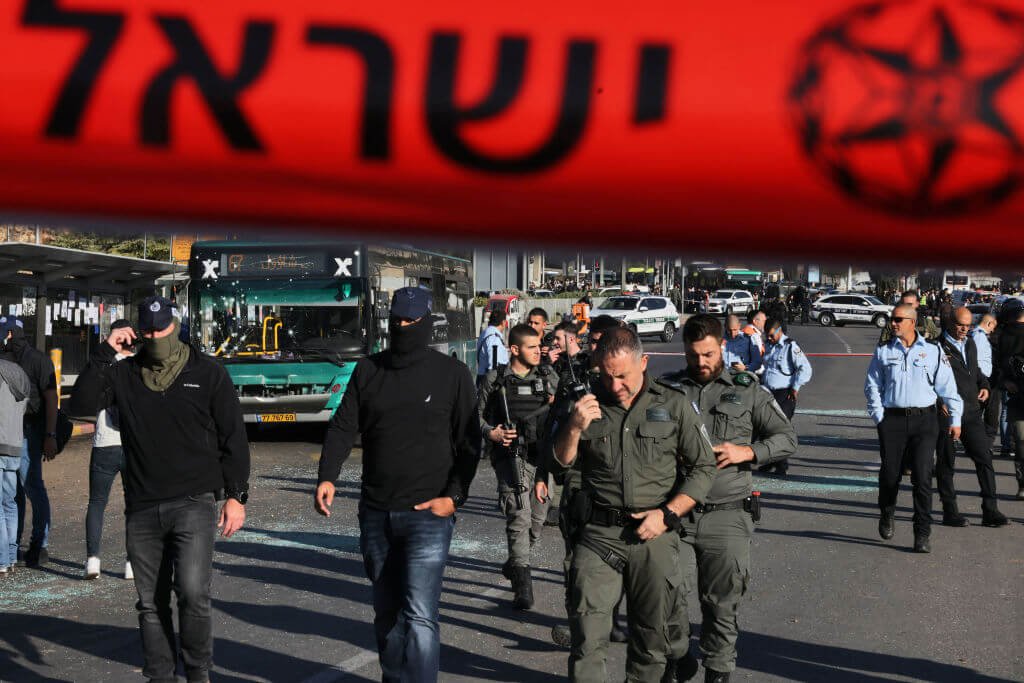 Israeli security forces gather at a bus stop in Jerusalem after an explosion on November 23, 2022. Photo by Getty Images

This article was originally published on Haaretz and is reprinted here with permission. Sign up here to receive Haaretz’s free Daily Brief newsletter delivered to your inbox.

Jerusalem had almost managed to forget the scenes at the scene of the terror attacks at the entrance to the capital on Wednesday morning. Bomb police officers crawled around looking for bomb remnants, broken bicycles, shards of glass and stones scattered over a wide area – and heavy traffic congestion as roads into the city were closed.

Not that Jerusalem has really forgotten what terrorist attacks are, the capital has seen dozens of such attacks in recent years – but none quite like this one – be it in terms of means, location or casualties.

Violence in Jerusalem is generally divided into waves: the first and second intifadas, the Abu Khader incidents, the 2015 knife intifada, the 2017 Temple Mount terror attack and metal detector incidents, the 2021 Ramadan incidents, and others.

Each wave has its own characteristics, but the terrorist attacks in Jerusalem since 2014 have a mainstream model: a lone attacker or two not sent by a specific terrorist group, armed with a knife, or in the worst case, improvised rifles, which police and police to attack. border police officers at the Damascus Gate, at the Gate of the Temple Mount or along the seam line.

These attacks usually end with some injuries and the death of the terrorist. There have been exceptions to this – for example, the gruesome memory of the murder of believers in a synagogue in the Harnof district in 2014. But most of the terrorist attacks in recent years have not taken place in the western part of the city, no explosive devices have been used and were not particularly advanced.

This morning’s attacks broke all those rules – a hellishly integrated attack on the western edge of the capital with explosives – as it now appears – detonated remotely without a suicide bomber. To recall a similar incident, we have to go back to 2011, when a bomb exploded next to a kiosk in the International Convention Center area, known to locals as Binnyanei Hauma, killing a woman. There were deaths and dozens injured. The site was formerly known as the Kiosk, which had been blown up as a result of an earlier terrorist bombing 15 years earlier.

But for most adult Jerusalemites, Wednesday morning’s scenes remind them of other periods—the Second Intifada, a period of terror in Jerusalem. At the time, there was a famous rule in the capital that if you hear three ambulance sirens in a row, there was a terrorist attack – and you should go see where your family is.

Usually it was suicide bombings that caused mass casualties on a bus or in a cafe. This bitter period led to the establishment of the separation wall and the deep penetration of the Shin Bet security service into East Jerusalem and the West Bank. The security forces appeared to have neutralized the Palestinian terrorist organizations’ ability to carry out complex terrorist attacks that required knowledge, equipment, a laboratory, drivers and commanders. This morning’s explosions put an end to this illusion.

The bus stop at the entrance to the capital is a kind of institution in Jerusalem, a miniature central bus station. Hundreds of people, mostly from the nearby Haredim district, throng each morning to wait for buses or join rides. It seems that whoever hid the bomb knew the place and the crowd there. The damage done shows that the bomb was placed behind the bus stop.

For now, the terrorist attack has seriously disrupted life in the city. Traffic is at a standstill, ambulances and police cars are blaring sirens, politicians are starting to arrive on the scene and hundreds of Haredim have gathered around it curiously.

Another key difference between the terrorist attacks we’ve become accustomed to in recent years and what happened on Wednesday morning is the intensity of the disruption to life in the city. Police and municipal teams were very efficient in restoring normalcy to the scene of the attack.

After examining and evacuating the injured, a cleaning crew arrived from the city and sometimes within an hour or two it was impossible to see that anything had happened. On Wednesday, the picture was completely different. The bombing turned life in the capital upside down.

Bomb squad officers continued to try to collect ball bearings and other pieces of metal that were most likely part of the bomb, while ambulances and police cars continued to sound their sirens and a helicopter hovered overhead. Politicians, like the curious Haredim, began to arrive on the scene. One of them thought he recognized a Palestinian driver and shouted “death to the Arabs” at him.

The big question hanging over the capital this morning is: is this just the beginning of a new era with the terror attacks we have forgotten? Are we at the start of a new wave?