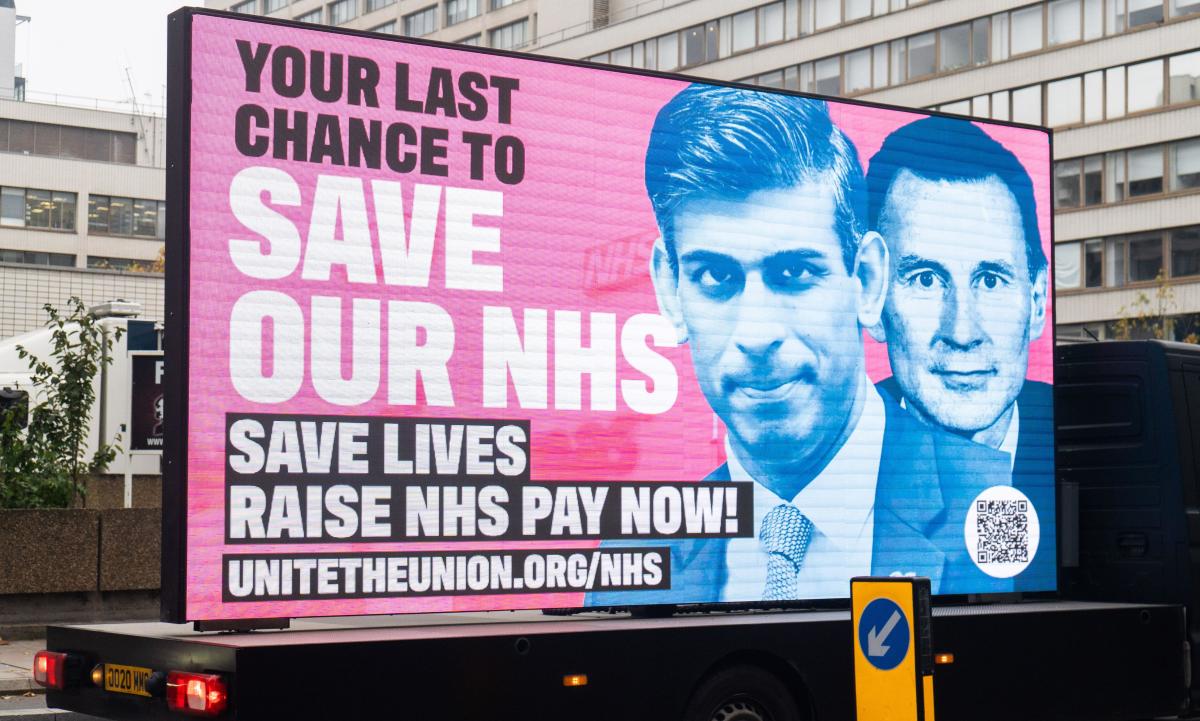 Britain is facing a hot month of union action and disruption in the run-up to Christmas, with nurses likely to join a wave of strikes along with postmen, education and railway workers in the busiest week for office parties and festive shopping. will be at its peak during

The Royal College of Nursing (RCN) is expected to announce unprecedented industrial action following the expiry of the deadline given to ministers following a strike vote two weeks ago.

It is likely the first in a series of attacks over the winter and spring by NHS staff, including junior doctors and paramedics.

The expected move came as postmen, university staff and Scottish teachers went on strike on Thursday, while rail unions confirmed plans for an eight-day national strike despite a “positive” meeting with ministers.

While unions have said there are no plans for general strikes, many have spoken of coordinating union action to maximize disruption and political impact. The RMT leader, Mick Lynch, has called for “a wave of action” on behalf of low-wage workers, a phrase echoed by TUC general secretary Francis O’Grady, although he added that synchronization is not always the most effective strategy. . .

After meeting with transport secretary Mark Harper on Thursday, Lynch said the minister had “started the conversation” and “cleaned up the trash” under recent predecessor Grant Shapps.

However, Lynch refused to call off the eight-day strike in December and January. He said: “If we call off the strike, we will never be able to negotiate… My members will not forgive me. I made a commitment – ​​the action will continue until we have a concrete result.

Harper described the Department for Transport meeting as “constructive” and said: “A deal needs to be struck, and I am confident we will get to it – I want to help the RMT and the employers get to an agreement and Dispute.” For the benefit of the traveling public. ,

Harper will meet with Mick Whelan, general secretary of the Harper Train Drivers’ Union, next week following another 24-hour strike by drivers on Saturday, November 26, which will halt services on lines across the UK.

Meanwhile, there were picket lines outside schools, universities and mail sorting centers as the latest wave of union action began on Thursday.

As many as 2.5 million students were expected to experience disruptions in what was billed as the largest strike in British higher education history.

About 70,000 University and College Union (UCU) members, including teachers, librarians and researchers, began a 48-hour strike on Thursday with another one-day strike next Wednesday in a dispute over wages, pensions and contracts.

Joe Grady, UCU general secretary, said: “If university rectors don’t take it seriously, our message is simple: this strike will be just the beginning.”

University administrators, sweepers, security and catering staff are also campaigning in unison over salaries in 19 universities.

In Scotland, schoolchildren stayed home as teachers across the country staged their first national strike over pay in nearly 40 years after the latest pay proposal was denounced as a “disgrace”.

Some primary schools in Orkney and Shetland reopened as normal on Thursday as thousands of members of the Educational Institute of Scotland (EIS) took part in a one-day strike. Two more school strikes by other unions are planned for December.

Thousands of Communications Workers’ Union members who work for Royal Mail also walked out on Thursday in a 10-day strike ahead of Christmas. The strikes are expected to impact Black Friday’s peak day this week, with the last action scheduled for Christmas Eve.

CWU Secretary-General Dave Ward told the London picket line yesterday that Royal Mail was not paying overtime for overworked workers, accusing them of a “psychological attack”. The CWU has rejected a 9%, 18-month pay deal because Royal Mail’s plans to change working conditions make it a “gig-economy-type” employer.

The economic impact of the strikes remains uncertain, according to the Office for National Statistics (ONS), whose growth figures are more likely to take a hit due to closures such as Queen Elizabeth II’s funeral in September.

“Many movements take place during activities that take place before or after strikes,” said a spokesperson. The ONS recently resumed collecting data for attacks after a pause during the COVID-19 pandemic. About three quarters of a million days were lost due to industrial action in the four months from June to September.

Despite being the highest numbers for more than a decade, they are well below the peak years of attacks in the 1970s and 1980s. In 1979, the year of the winter of discontent, a total of 29 million days were lost to industrial action and 27 million during the one-year miners’ strike of 1984-1985.