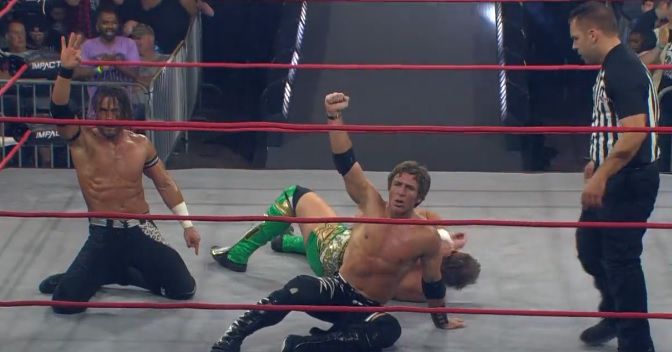 Aussie Open came to Impact to add more championships in addition to their NJPW Strong Openweight Tag Team Championship. They started off strong with a debut win over Bullet Club’s Chris Bey & Ace Austin. Kyle Fletcher & Mark Davis had their eye on the fast track to gold, so they challenged a few Impact legends for #1 contender status. Their opponents were Motor City Machine Guns duo Chris Sabin & Alex Shelley on Thursday night’s episode of Impact wrestling.

The NJPW tag team worked their game back and forth past Shelley on a delayed vertical suplex.

It was only a matter of time before Shelley hit the hot tag for Sabin to go wild. The match progressed with alternating spurts of momentum from each team. Aussie Open was in the groove, approaching victory for the Corealis double pumphandle raised slam, but Sabin escaped to rally for a tornado DDT on Davis. Shelley joined in the fun with a quick tag team attack to knock Fletcher out of the mix. MCMG focused on Davis for a Skull and Bones splash neckbreaker combo for the win.

The Motor City Machine Guns advance to Bound for glory to wrestle Matt Taven and Mike Bennett for the Impact World Tag Team Championship. That will surprisingly be a first time tag team match between MCMG and OGK. Those two teams have held tag titles together eight times through Impact, ROH and NJPW.

The Bound for glory card on October 7 currently contains: