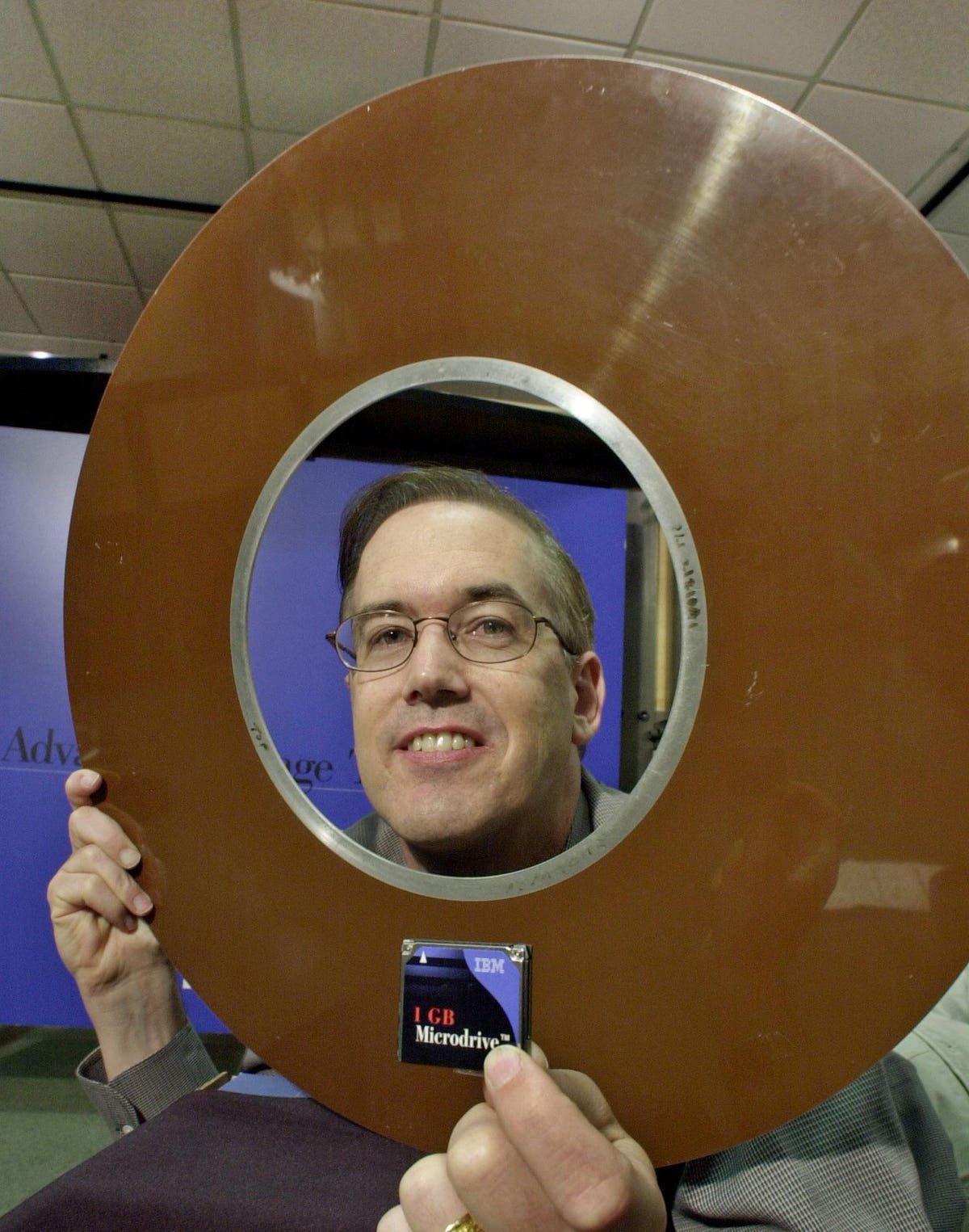 On September 14, 1956, IBM announced the 305 and 650 RAMAC (random access memory accounting) “data processing machines”, which included the first disk storage product. The 305 came with fifty 24-inch drives for a total capacity of 5 megabytes, weighed 1 ton, and could be rented for $3,200 per month.

Inventory management was one such activity. For example, in warehouse operations, each order usually requires many cards to be manually located, removed from the deck of cards, inventory information updated, and the updated cards returned to their original locations. To facilitate this activity, card trays were placed on work tables so that several people could access the cards from the same folder. Commonly known as a “tub file”, this method of organizing and processing information was time consuming and prone to error.

IBM project staff evaluated each existing storage technology in an effort to find the best technical solution to the productivity loss and poor quality associated with “tub files”. In addition to improved capacity and reliability, magnetic disks – the storage technology of choice – can provide random access to data. A new method of finding stored data (encoded in software) when its physical location on disk was unknown ensured the success of a new way to store, organize and share business documents.

Announced on September 4, 1956, the IBM 350 Disk Storage Unit shipped with fifty 24-inch disks and a total capacity of 5 megabytes; The first customer was the United Airlines reservation system. Included in the 305 and 650 RAMAC (announced ten days later), it promised, as stated in the IBM press release, “business transactions will be processed immediately after they are fully processed. There will be no delay. Business people will be able to get the latest facts they need instantly. The random access memory device will revolutionize not only punch card accounting, but also magnetic tape accounting.

It was later shown at the 1958 Brussels World’s Fair, where visitors could use the keyboard to ask “Professor RAMAC” questions and get answers in ten languages. This PR move heralded a day when millions of people would receive answers from the World Wide Web, the largest “tub file” ever created, created (mostly) using Google’s AI.

Even before the rise of the web, which provided billions of people with an easily accessible channel for consuming and creating data, digital data showed its seemingly limitless growth nature. At the Fourth IEEE Symposium on Mass Storage Systems in April 1980, IA Tjomsland presented the paper “Where Do We Go From Here?” In which he said: “People involved in storage devices realized long ago that Parkinson’s first law can be paraphrased to describe our industry – ‘Data expands to fill the available space’… I believe the enormous amount of data is held because users have no way to identify obsolete data; the penalty for retaining obsolete data pales in comparison to the penalty for discarding potentially useful data is less clear.”

until 1996, According to RJT Morris and BJ Trukowski in “The Evolution of Storage Systems,” digital storage for data storage has become more cost-effective than paper. And in 2002, digital information storage surpassed non-digital storage for the first time. According to “The World’s Technological Capacity to Store, Communicate and Compute Information” written by Martin Hilbert and Priscilla Lopez, the world’s information storage capacity grew at a compound annual growth rate of 25% per year between 1986 and 2007. They also estimate that in 1986 99.2% of all storage capacity was analog, but in 2007 94% of storage capacity was digital, a complete role reversal.

In October 2000, Peter Lyman and Hal Varian of UC Berkeley published the book “How Much Information?” Published – The first comprehensive study to quantify the total amount (excluding copies) of new and original information created annually in the world in terms of computer storage. He estimated that in 1999 the world produced 1.5 exabytes of raw data. In March 2007, John Gantz, David Rensel and other IDC researchers published the first study to quantify and predict the amount of digital data created and replicated each year. They estimate that the world created 161 exabytes (161 billion gigabytes) of data in 2006, and that between 2006 and 2010, the data added annually to the digital universe would increase sixfold to 988 exabytes, doubling every 18 months.

Also read  5 New Technologies Could Turn Our World Into A Creepy, Lifelike 'Periphery'

The RAMAC became obsolete within a few years of its introduction as the vacuum tubes that powered it were replaced by transistors. Today, disk drives still serve as the primary container for digital data, but solid-state drives (flash memory), formerly used in mobile devices, are also widely used in current RAMAC successors. Disk drives are increasingly being replaced to support business operations.

In 1956, IBM created new markets and businesses based on fast access to digital data, regardless of the form of storage. As Seagate’s Mark Crider said in 2006, “Instead of Silicon Valley, they should call it Ferrous Oxide Valley. It wasn’t the microprocessor that made the personal video recorder possible, it was the storage. It makes new industries possible.” Is.

Today, it enables AI, a new way of data analytics that impacts all industries, businesses and consumers.