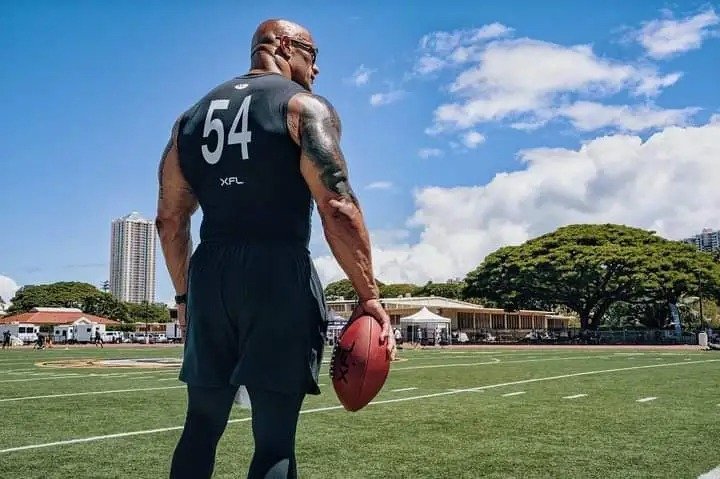 Dwayne Johnson has successfully gone from WWE superstar to Hollywood actor. Since 2002, Johnson has starred in over 40 films and won the WWE World Title multiple times. Recently, he’s been busy setting up the revamped XFL Football League.

While talking about XFL, before becoming an actor and WWE Superstar, Johnson aspired to pursue a career in the NFL. However, he could not fulfill this dream and joined the family business.

Recently shared a post on his where he was talking about the NFL. He wore the XFL jersey with the number 54, which he called a personal number.

In the caption, Johnson wrote, “Why am I wearing #54. There are 53 men on an NFL roster who play Sundays and live their dreams. I was #54. I was that player who was told, ‘You’re good, but you’re not good enough…thank you for all your hard work and that’s where it all ends.”

Additionally Johnson added, “When you worked, lived and breathed a lifetime for something you were so passionate about, only to be told you weren’t good enough and there was nothing you could do about it. It became one one of the biggest kicks in the gut I’ve ever had and one of the biggest mental health challenges of my life.

“But as painful as it was to accept the dream is over – it also created a hunger, an intensity and it gave me the biggest fucking chip on my shoulder to attack life with unrelenting ferocity. This is why the #54 on my back is so deeply personal to me. Grit, determination, ferocity, passion, relentlessness. Life is very different for me these days and I’m forever grateful, but that chip never goes away. Already. dj#54#LFG”

The former champion played college football at the University of Miami and was part of its national championship team in 1991. He aspired to a professional career in professional football but was not drafted in the NFL Draft in 1995. He then signed with the Calgary Stampeders of the Canadian Football League (CFL), but was cut from the team in his first season.

When will the Dwayne Johnson-owned XFL Football League start?

The XFL will have its third chance on the national scene. ran the previous two seasons, with the first in 2001. It restarted the league in 2020, but it was later closed due to the pandemic situation.

Additionally, Dwayne Johnson and his ex-wife Dany Garcia bought the league from Mr. McMahon and are eager to reestablish XFL on a larger scale. The league will start in February 2023 according to Johnson’s announcement.

The new owners are eager to launch the league with new motivation next year. Johnson, whose first love was soccer, will do his best to bring the XFL to the top level in the United States.