Earlier this week it was revealed that The Dark Order member Allan Engels will be leaving AEW when his contract expires, now that his time working for the company has ended.

The Angels stated that they felt “there is more room to grow outside of AEW,” and that they ended their time with Tony Khan’s promotion on good terms. For those who didn’t see his interview, the Angels have now taken to social media to share a lengthy statement about the end of their run.

“As of June 30 my AEW contract has expired. I am nothing more than to be grateful for the two years I have spent there. I love AEW. This was/is the best place ever to work. I get to wrestle with some of the best wrestlers in the world on a weekly basis, as well as travel to some of the most amazing cities and meet some of the best fans in the world. There are no hard feelings between me and AEW or Tony Khan.

“I had a great time at AEW and would have loved to stay, but I am extremely excited for my future in pro wrestling. I am 24 years old and I see this as the beginning of my wrestling career. Now I have to show everyone how good I really am. I’m going to grind harder than ever. I’m going to make as many cities as I can, meet as many fans and wrestle as much as I can, until I’m considered one of the best people I am today. Thank you for all the support and kind words and I hope you all continue to follow my journey. A is in the chat!” 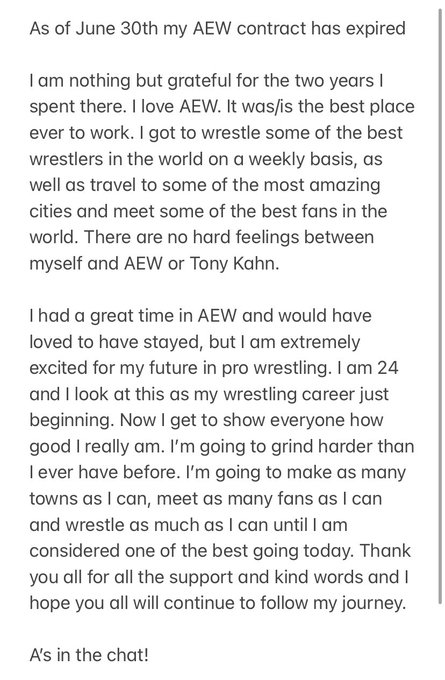 The Angels are not the first members of The Dark Order to leave the company this year, although Stu Grayson left back in April, where he wished good luck to the rest of the faction. It is currently unknown whether the two men will reunite on the independent scene for future tag team matches.

Despite the two recently leaving the company, and the fact that The Dark Order hasn’t been featured on television much of late, Evil Uno took to Twitter to say that “The Dark Order isn’t dead.”